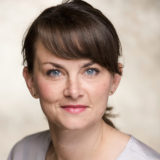 “I have been associated with The Theatre Workshop since its inaugural year in 2002, when I taught group Drama classes.  I became Head of Drama and held that position for some time, before moving into one-on-one tuition, taking on over 150 private students. I am extremely proud to have nurtured these individuals and witness them achieve so much – scholarships all across the South coast, wonderful places in local festivals, fantastic exam grades and gaining entrance to prestigious multiple Theatre Schools such as RADA, Guildhall, Bristol Old Vic, LAMDA, GSA, Mountview, Urdang, Performers, Arts Ed, CSSD, Drama Centre and Rose Bruford.

I graduated from Mountview Theatre School and enjoyed a varied and rewarding career in the performing arts industry under my stage name, Rebekah Clifford.  From playing Mrs Lyons in Blood Brothers in the West End, to performing in many UK tours (Evita, Scrooge, Stuart Little), as well as touring the world as a lead singer on the QM2, I loved every minute! I decided that my performing days were over when I had children. Since then, my focus has been on my family and the development of children in the performing arts. I feel that this is the most rewarding and gratifying job out there, in fact I can’t even call it a ‘job’ as I love it so much.

In addition to my role with TTW, I have been in partnership for many years with my husband, Craig in our company, West End Experience, which provides Holiday Schools and Workshops all over the UK.  Naturally, there is a huge crossover of students between TTW and WEE and Craig and I have absolutely loved watching both companies grow side by side, seeing all the young talent blossom, confidences build, friendships being created and skills flourish. I am also the Artistic Director of Hungry Wolf Visionary Youth Theatre (TTW’s Youth Theatre arm) and wrote and directed our very first production, ‘Sunnyside Up’, which we took to Brighton and Edinburgh Festival, as well as touring schools across Sussex and having it filmed by ITV Fixers. I have directed youth productions all along the South Coast with The Theatre Workshop from Hairspray, Annie, Bugsy Malone, Blood Brothers, and The Rise and Fall of Little Voice to my own writing, Growing Pains and The Monologue Jam in Brighton, Edinburgh and the Hove Grown Festival. Along the way, my productions have garnered rave 5* reviews, truly a testement to the talented students I have had the pleasure of working with. I assisted on The Electra Project and Runts for Brighton, Edinburgh and Camden Fringe Festivals, all with Hungry Wolf. I was the children’s director for the 2016 Brighton Festival’s, Digging For Shakespeare.

Myself and Craig became the Creative Directors of The Theatre Workshop in 2016, a company with which I have felt so passionately about for so long and whose members, children and families I have grown so close to. We believe beyond doubt in the positive impact of theatre and performing arts in children’s lives and the opportunites that these skills give to young people. We are absolutely thrilled to be in the TTW driving seat; enabling more and more young, passionate children to reach their potential in the 10 schools across the South Coast. They are, after all, the future and with confidence and belief – anything is possible.”

Rebekah was born and grew up in Brighton, where she still lives with her husband, two daughters, two guinea pigs and their dog.