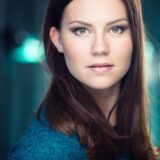 After graduating from the Brighton Academy in 2016 Molly immediately starting working for Belinda King Creative Productions and performed as a lead vocalist in the production casts on board Seabourn cruise lines. Between her two contracts she performed many cabarets with singers such as Natalie Weiss and Oliver Thomspett. After this she moved to London and performed as a dancer/Aerialist in Disney’s ‘Fantasia’ at the Vaults Theatre. Last year she returned to Brighton to play Princess Danielle in Brightons Family Pantomime ‘Jack and the Beanstalk.’ In 2019 Molly has been busy touring and performing classic swing, jazz and jive with the Satin Dollz and The Jive Aces. The show ‘Big Beat Revue’ had it’s west end debut at the Aldwych theatre in March.
Molly has recently returned from playing the role of Rizzo in ‘Grease’ the musical with Royal Caribbean and we are very excited to have her back!