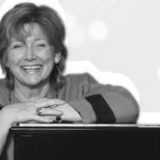 Mary Hammond is a graduate and Fellow of the Royal Academy of Music in both singing and piano. Extensive work as a singer encompassed a wide spectrum of music, from opera, pop / rock, television, film, radio and live concerts.

She works as a vocal consultant to Cameron Mackintosh Ltd, The Really Useful Group, The Royal National Theatre and other national production companies on West End and touring productions.

As well as her continued close involvement with contemporary theatre she is currently coaching singers in television, radio and pop and rock groups with major companies. She regularly presents workshops on the integration of acting and singing at international conferences, including in the USA, Canada, Sweden, Denmark, France and the UK.