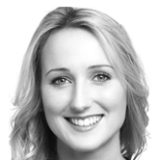 Other credits include:
Bond Girl dancer in A Celebration of James Bond (West End), Susie in Crazy for You (Kilworth Theatre, Leicester) and June in Chicago with the West End and Broadway team in Istanbul.

Television includes:
Vanessa in Hollyoaks and Karen in Eastenders. She has also appeared in the Alan Titchmarsh Show, Strictly Come Dancing, The Feelgood Factor, This Morning and most recently, John Barrowman’s Tonight’s the Night.