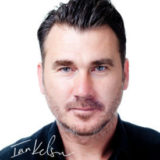 Ian has recently received his fourth coffin plaque from his demise on Coronation Street playing Vinny. Other TV deaths include ‘dead’ Dave on Emmerdale, Patrick RIP on BBC’s Casualty, and Howard the practice manager on Doctors. Other TV credits that he didn’t die in, Matt Brewer, Down to Earth. Richard Mayne, Blue murder. Matt, Home is where the heart is. Recently an uptight writer on the current series of Love Sick on Netflix.

Ians west end credits are Danny in Grease and Billy Flynn in Chicago.