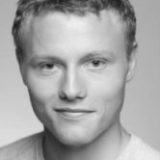 Curtis began performing at the age of six and appeared in many musicals and plays around Sussex. At 18 he was accepted on a full scholarship into Mountview Academy of Theatre Arts in North London where he studied musical theatre for the next three years. On graduating he went on to work with English pop singer Chesney Hawkes and ITV’s Loose Women host Zoe Tyler, playing the part of Asher in Andrew Lloyd Webbers’ “Joseph and the Amazing Technicolor Dreamcoat”.