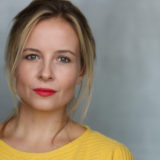 Claire trained at Redroofs Theatre School and then at The Royal Academy of Music. After graduating from R.A.M Claire went to Italy and was a principle performer in a musical tour that finished at La Scala, in Milan.

Musicals include: Titanic (Lady Caroline) in London and Toronto, Canada. Whistle Down The Wind (Swallow) The Palace Theatre, West End.

UK tour: Half a Sixpence  (Ann Pornick, opposite Gary Wilmot), Scrooge (The Ghost of Christmas Past, alongside Tommy Steele). Claire also has her own Cabaret that she has performs at venues such as The Pheasantry.

Claire has been in several short films, commercials and voice overs. Also a few summers ago she shot her first feature film. She has had guest appearances in Casualty and Miss Marple also.