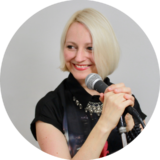 Rachel originally studied viola, piano and singing at the Purcell Music School and the Guildhall School of Music and Drama in London. Since graduating, she has enjoyed a varied career as a professional vocalist, performer, composer, arranger, session musician and producer in the fields of Pop, Classical, Rock, Electronic Dance, Film and Musical Theatre. She has worked under conductors such as Sir Simon Rattle, and collaborated with artists that include; members of the BBC Singers, Rev Hammer, New Model Army, Faye Rochelle, Darryl Way and Matt Bellamy. Her live performances have taken her to France, Germany, South Africa, and throughout the UK. Rachel has also made various radio and TV appearances and written music for independent films, including one which was premiered at The Cannes Film Festival in 2006. She has released her own original material on the EIAG record label and her vocals, string arrangements and viola playing have been featured on releases by Attack Attack Records, Cooking Vinyl, V2 Records and Cherry Red Records. During her 18+ years as a singing teacher, she has taught everyone from charting pop singers, to West End performers and also runs various ensembles in the Brighton area. Rachel continues to work as a professional vocalist and songwriter and is also  part of the electro pop / acoustic duo,  ‘Every Inch a Gentleman’.