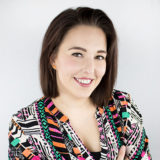 Erin Enfys is a comedian and singer originally from Wales. They trained in Musical Theatre at the London College of Music, but while auditioning for the perfect West End role, they fell in love with improvisation and comedy. Erin now teaches performance across the country, as well as still working on stage and screen. Recent credits include Southern Fail the Musical, Extreme Championship Improv, Bite-Size Plays, Saucy Jack and the Space Vixens, and the recent Disney’s Cinderella film directed by Kenneth Branagh.